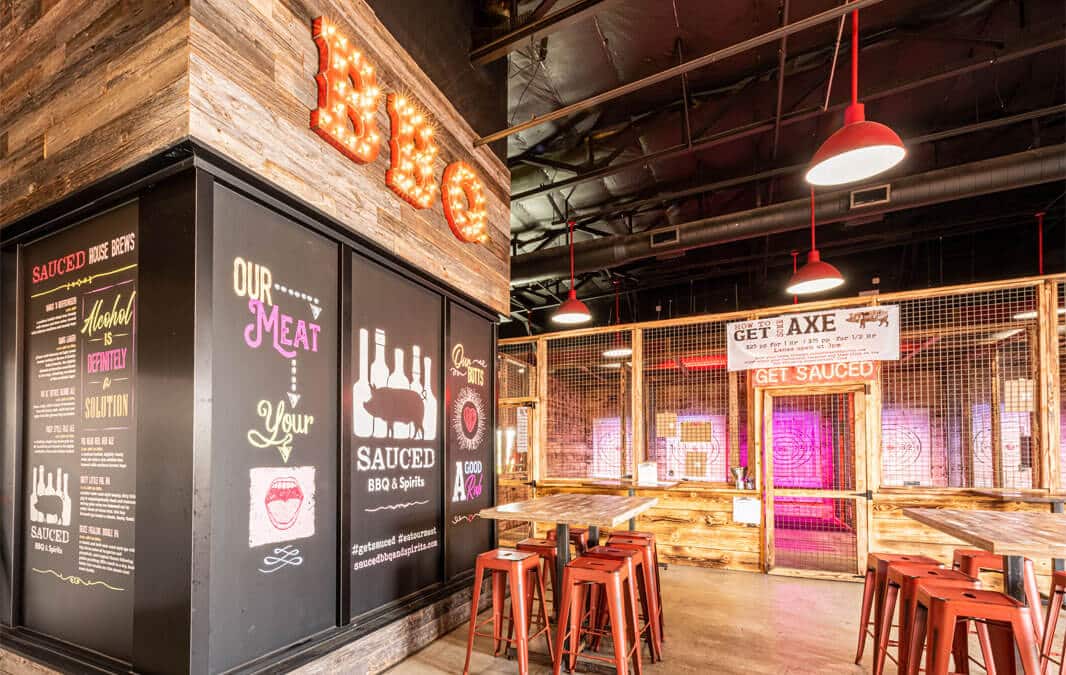 Who doesn’t love a good barbeque? Traditionally BBQ-style cooking includes a number of meats and flavors, slow-roasted and seasoned differently, depending on your tastes. Does anything taste more like summer?

Fortunately, we have a restaurant right here in town serving up this authentic flavor year-round. Two cousins who remained close despite living more than 2,000 miles apart have brought that authentic southern taste to Westminster, California, so read on to find out more about how you can “get sauced.”

Sauced BBQ & Spirits is family-owned and operated, started by two cousins, Brenden Scanlan and Barrett Gomes, who—despite living on opposite sides of the country—wanted to get into the restaurant business since their time in college. The two opened the first Sauced BBQ & Spirits in central California in 2012, building it from reclaimed barn wood shipped in from Georgia and North Carolina. Since then, the company has opened four additional restaurants, including one just outside of Westminster, California.

“The atmosphere at Sauced Orange is lively,” says Kristina Wulff, director of brand development. “We have a rustic interior that we refer to as ‘Hillbilly Chic’ with a lot of reclaimed wood and metal elements.”

Brenden’s love of cooking BBQ is attributed to his Big Green Egg ceramic smoker, which he used to develop his craft in his backyard, eventually participating in competition cooking near Atlanta, where he and his team ranked well in several categories. The pair also visited dozens of restaurants in order to learn more about the craft of cocktail mixing.

“We slow smoke our BBQ daily, and our entire menu is rooted in authentic, southern-style BBQ,” says Wulff.

BBQ plates can include one, two, or three types of meat, including ribs, wings, brisket, pulled pork, chicken, pork belly, and smoked jalapeno cheddar sausage, all cooked to order and featuring a wide variety of sauces, such as Kansas City-style BBQ, sweet and tangy, habanero hot, or tangy mustard.

“We are unique because we not only have great BBQ, a full bar with some amazing cocktails, and a rotating list of craft beers, but we also have axe throwing cages where you can ease all of your COVID stress,” says Wulff.

The full bar features house beers, wines, and specialty cocktails, with daily specials on beer and a shot combos, and whiskey of the day. All five locations, including the one just outside of Westminster, also feature rotating beers on tap, showcasing a wide variety of spirits.

Following the success of Sauced BBQ & Spirits, Brenden and Barrett started Plucked Chicken and Beer, which focuses more on fried chicken-based menu options. The restaurant has grown to include three brick-and-mortar locations, with limited menu items also available through ghost locations by way of delivery services such as DoorDash.

So the next time you’ve got a hankering for some authentic southern BBQ, why not “get sauced” at Sauced BBQ & Spirits near Westminster, California? And if you are in the market for a new apartment in the Westminster area, contact Pointe Pacific Apartments today to schedule a tour!